During a webinar conducted by Growth Strategy Partners and promoted by the National Association of Sporting Goods Wholesalers, panelists and attendees were asked what they believed demand would be for the shooting sports industry in 2018.  The responses ranged from up more than 10% to down more than 5%.  Marketplace Insight provided a statistical forecast which was a little surprising to many attendees.

2017 has been a challenging year for many in the shooting sports industry.  During the interactive webinar, Building A Successful Business in 2018, with three guest speakers, discussions focused on what drove the challenges in 2017, what are the expectations for demand for 2018, and what should executives do to improve their performance in 2018.

The webinar was conducted by Chris DiCenso and George Harris of Growth Strategy Partners and the panelists were Tom Taylor, Chief Marketing Officer and Executive VP of Sig Sauer, Mike Noell, Chairman of Sentry Products Group and founder of Blackhawk, and Brad Burney, President of LM Burney Distributors and NASGW Board Chairman.

Using adjusted NICS numbers provided through November by the National Shooting Sports Foundation and estimating December transactions, the expectation is firearm transactions in 2017 will be about 11% lower than 2016 and even 2% lower than 2015.  Many business owners, including sales results from some of the public companies, indicate a much higher drop in sales and especially profits.  Tom Taylor summarized the situation by stating that, “We don’t have as much of a market problem as we have an inventory problem,” indicating that the excess inventory in the pipeline has caused more of an issue than the reduced demand.  George Harris noted that companies need to become more adaptable to the ever-changing demands of the industry.  This requires a culture of continuous improvement.

Discussing future demand is where there were considerably different opinions.   Polling the audience of industry executives, most, 31%, believed that demand in 2018 would be 0 to 5% higher compared to 2017.   The second highest vote was demand of over 5% while the third highest vote, 19% of attendees, was for a forecast of at least 5% down.  A chart of the poll results is below. 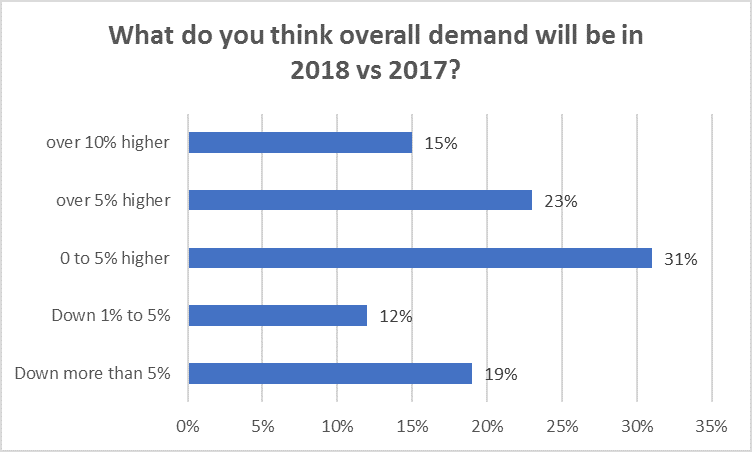 Marketplace Insight, which offers exclusive data and industry research within the firearms industry, used a statistical forecasting tool to forecast demand for 2018, and forecasted a 5% drop in transactions in 2018.  This was the lowest vote by attendees!

A common theme from the panelists was that executives should not overly focus on what the sales forecast is for 2018, but should instead focus on improving business fundamentals.  Mike Noell emphasized the need to focus on ‘basic blocking and tackling’.  This was great to hear as Growth Strategy Partners has been promoting their 7 Keys to Growth, or the business fundamental that their extensive research has identified which drives long term profitable growth.  Brad Burney echoed the need to validate your assumptions when building your plans as the incorrect assumptions are typically which drives poor results. 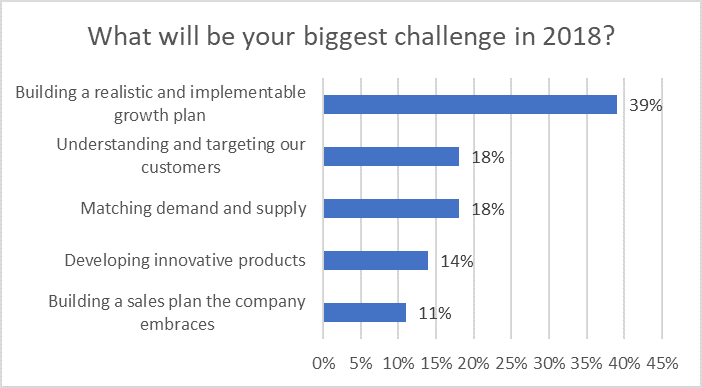 To help improve a company’s understanding of their customers, overviews of research reports conducted by Southwick Associates and the National Shooting Sports Foundation were shown.  Some of the data in these reports help executives identify more specifically who their customers are, why they buy, and the amount of money they invest in select categories.

Although many attended the webinar to hear what the sales forecast would be for 2018, Chris DiCenso of Growth Strategy Partners emphasized that growth and performance are relative to your competition and the market.  “If your business was down more than 11% in 2017, you effectively underperformed compared to the market.”  Chris continues to state that, ‘Companies which implement robust growth planning and sales and operations planning processes will be guaranteed to outperform the market and the competition. Ironically these are two of the top challenges according to the poll.”

To listen to the webinar visit http://growthstrategypartners.com/resources/videos-2/

Curious about Growth Strategy Partners News or Events? Join our email list (we have a strict 'no share' rule so your information is safe with us):